A significant minority of Australians became politically active in the past year, largely off the back of perceived excessive government intervention in the form of covid lockdowns and vaccine mandates. This was most visible from the levels of attendance of protest marches across major cities across Australia in late 2021 into 2022, which roughly coincided with the 6 months leading up to the federal election (just past in late May).

While it appeared that these people would impact the results of the election, there was little meaningful impact in actuality, in terms of the candidates who eventually won their electorates. This is unsurprising insofar that were dissident/disaffected voters spread roughly evenly across geography, then the lack of concentration in each electorate would mean that freedom friendly candidates were unlikely to win a majority vote, even after the re-distribution of preferences.

The prominent political parties catering to disaffected voters were the United Australia Party (the party funded by Cliver Palmer and lead by former Liberal MP Craig Kelly), Paul Hanson’s One Nation, and the Liberal Democratic Party, a libertarian party.

^The polling places without geographic coordinates were listed as having multiple sites.

Figure 1 below shows a histogram of the percentage of first preference votes that went to UAP/PHON/LDP by polling place.

First preference votes for the freedom friendly minor parties (UAP, PHON and LDP) averaged 10.3% across polling places, with a standard deviation of 5.5%. The median polling place had 9% of votes going to the FFMPs, while the frequency weighted mean of percentage votes going to FFMPs was 9.6%, with weighting based on total polling place votes. 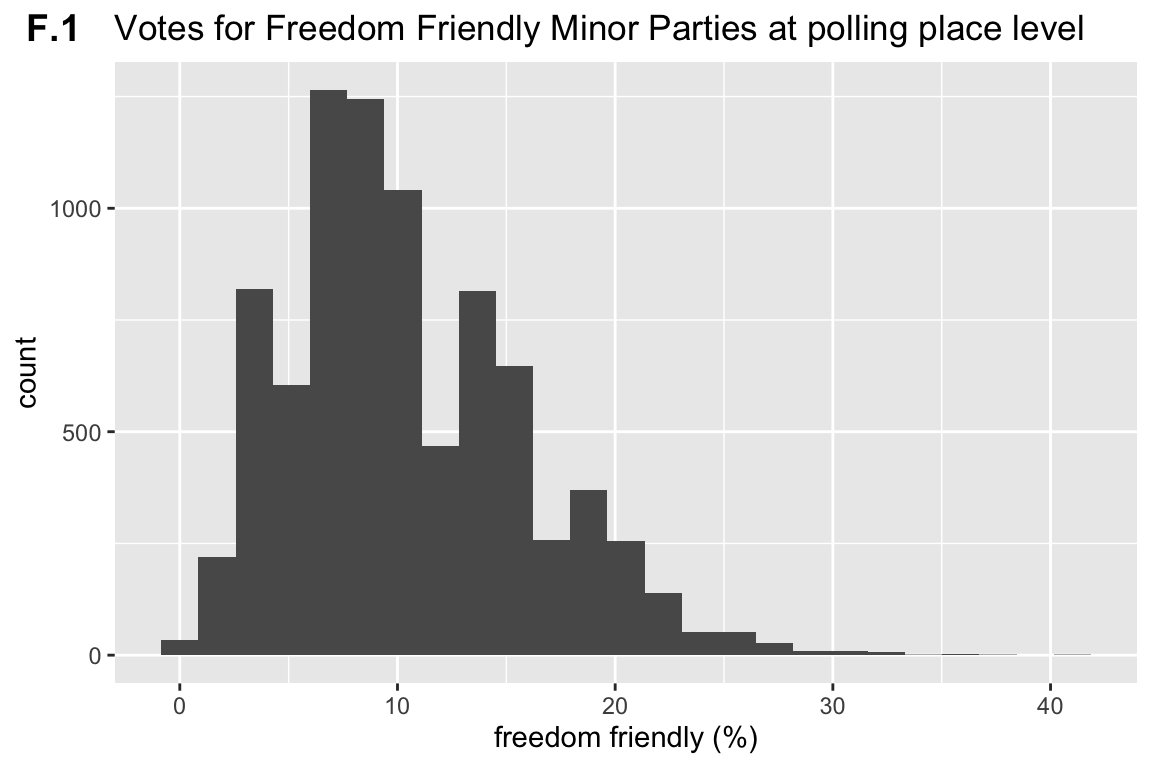 The top 10 polling places by support for FFMPs are shown below, where n_poll is the total number of votes at the polling place, n are votes for FFMPs, and the percentage supporting FFMPs are presented in the last column.

The Glenden polling place in the Queensland electorate of Capriconia had the greatest level of support at 41%, i.e. 32 out of 78 votes - a very small number of votes. Note the representation by state in the top 10 polling places, as they are indicative of broader state level trends.

The Disappointment that is Melbourne

The map of Victoria identifies polling places by levels of support for FFMPs: ranging from 0 up to 45%. i.e. 0-5%, 5-10%, 10-15%, 15-20%, 25-35%, and 35-45%. Darker orange shading indicates greater levels of support. Note the deliberately de-emphasized white large circles in inner-city Melbourne, where votes of residents presumably favoured the Greens or the Labour. The size of the markers are scaled according to quantiles of total votes at each polling place.

Support for the FFMPs in Victoria were largely at the outer fringes of Melbourne, predominantly the south-east of Melbourne in Dandenong/Pakenham and the surrounding area (e.g. polling booth Dandenong ISAACS PPVC with ~21%). There was also some support in the north near South Morang/Thomastown (South Morang Lakes 20% & Thomastown West 18%) and in the west near Sunshine and Hoppers Crossing (Derrimut Health and the Grange both had 18% support). 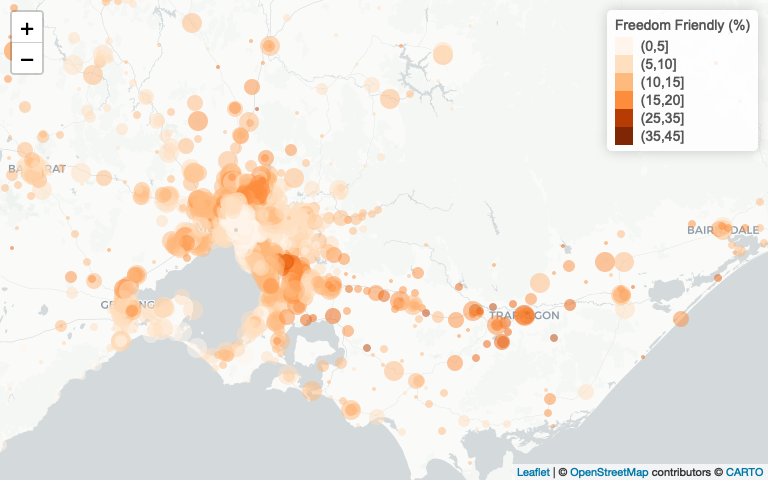 NOTE: click through or download and open the html version of this blog post to browse the results of the polling places using interactive maps. A pdf version is also available.

Interestingly, there appeared to by quite a few pre-poll voting centres (PPVC) with high levels of support for the freedom parties, meaning that disaffected voters were likely to have held firm views weeks out from the election.

Really though, the main centre of support for the FFMPs was the outpost of Traralgon/Moe/Morwell, with support at polling places ranging between 16% and 22%. Total votes at polling places in this locale were mostly less than a thousand, however, Morwell GIPPSLAND PPVC stood out as the exception on voter numbers/population size with 19% FFMP support from a total 8060 overall votes. Traralgon PPVC had similar numbers at 16% for FFMPs from 12,804 votes.

Zooming out, there is also some concentrations of support near Mildura and Swan to the north/north-west of the state. I say that Melbourne is disappointing though, because really support for the freedom friendly parties is relatively fringe, when compared with Queensland and NSW which we will look at next.

Signs of Resistance in Sydney, Pushback in NSW

Like Melbourne, support for the freedom friendly parties in inner-city Sydney was lacking, fluctuating near and below 5%. Reflecting a regional/metropolitan divide, there was similarly greater support for UAP/PHON/LDP outside of Sydney, in the second and third most populous cities of Wollongong and Newcastle. FFMP support hovered around 18% in Wollongong, and as high as 17% at Singleton South polling place and as high as 28% at Seaham, which appears to be a town adjacent to Maitland at the outskirts of the broader Newcastle population cluster. 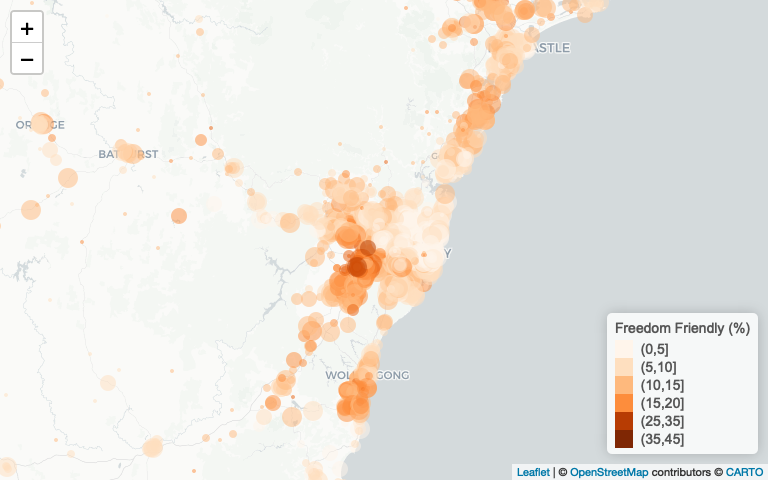 The main resistance to the red & teal wave was in the division/electorate of Werriwa, located in western Sydney. For instance, support for the freedom friendlies ranged between 23% and 27% for the top 10 polling places in Werriwa by support for FFMPs. Werriwa is more encouraging than the pockets of support in Melbourne because the levels of support are higher - approaching 25%, meaning that the contest of ideas and popular opinion are closer to being won in that local area. This translates to a healthier public discourse, less suppression of ‘alternative’ perspectives, and also in a practical sense is much closer in distance to obtaining political representation, which requires a majority vote after redistribution of preferences.

Support for the FFMPs was stronger in NSW than in Victoria, with additional support along the coast north of Newcastle, all the way up through Taree, Port Macquarie, Coffs Harbour before tailing off at Grafton; support ranged between 10% and 20%. Other concentrations of support included Wagga Wagga, Rosewood, Young, Cowra and Parkes. The towns/areas of Broken Hill, Lightning Ridge, Cobar and Gunnedah South near Tamworth can also all be added to the list. 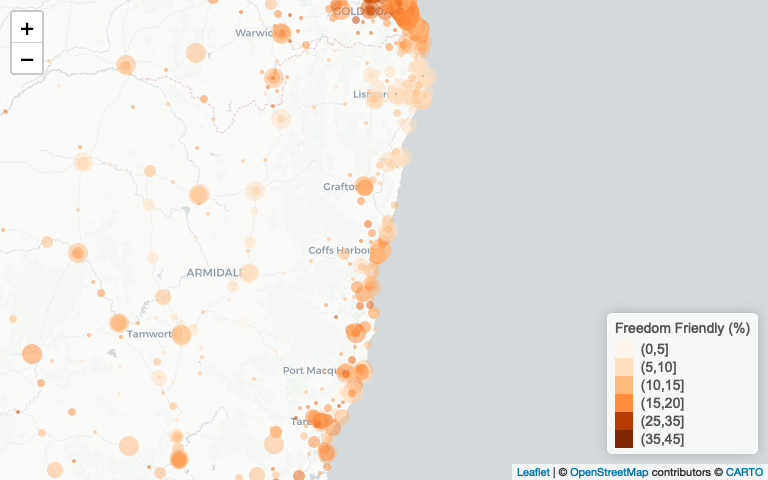 There is something interesting happening near Lismore and Byron Bay at the upper north of NSW towards the Queensland border. At the border where state border restrictions did impact local residents through impeding their movement, there is support for the FFMPs. The markers at the polling places in that area exist as part of a continuous oranged shaded grouping of support. Further away from the border, at Mullumbimby, Byron Bay and Lismore, support for the freedom friendly parties reached only 12%, perhaps reflecting the lesser effects of covid related policies rolled out and enforced by the state governments. The floods in Lismore region perhaps unsurprisingly also played a role in drawing votes towards parties that prioritized action on climate change.

There is cause for optimism in the Gold Coast region, along with Queensland in general, with the highest and most consistent levels of support for the freedom friendly parties across the country. It is unclear as to the cause, though the PHON and the UAP both originated in this state. Is the economy of Queensland comprised more of agriculture and tourism than of services and industry, unlike in the other states? Is it a cultural phenomena where the laid-back persona is just more generally averse to rigid rule following and suppression of civil liberties?

Aside from a hollowed out centre of minimal FFMP support in Brisbane (which collected 2 new green seats at the election), there is comfortable support of the FFMPs in range of 20% to the north, south and west of Brisbane - extending out to the Sunshine Coast, Gold Coast, and Toowomba respectively. Geographically, all these areas are part of the South-East Queensland population cluster. 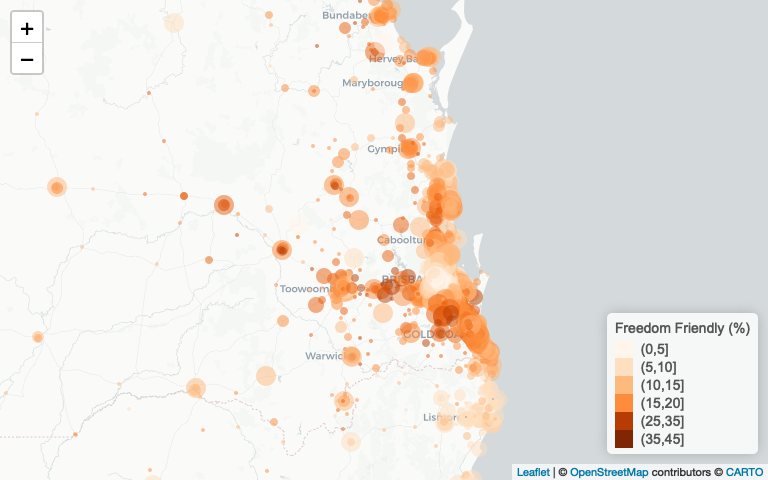 Further north along the Queensland coast, there were concentrations of strong support in the Mackay area, but less support for the FFMPs from Townsville and further to the north.

Darwin and the Northern Territory also stood out as having a strong representation of freedom friendly voters at the election. The top ranked polling places in the NT are listed below. Howard Springs is notable for its Covid quarantine camp - whose closure was announced in the past few days, while Scomo provided some great marketing for Humpty Doo by having a fish curry of Barramundi from said place on New Year’s eve.

Table 3: Top ranked polling places in the NT by support for FFMPs 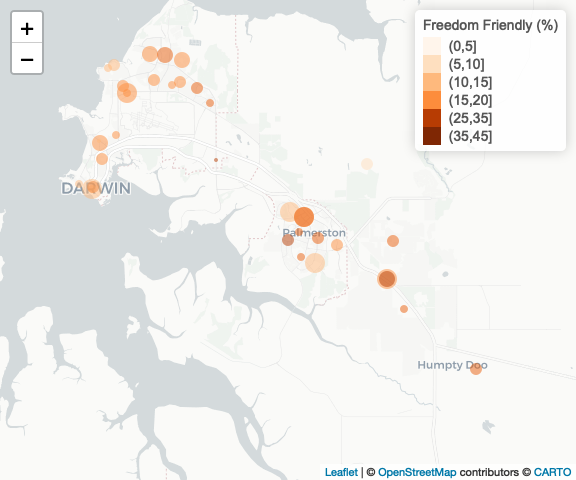 In terms of support for the FFMPs, Western Australia appears to be a barren wasteland. As this appears to be somewhat atypical when compared to the rest of Australia, I am provided with an opportunity to crack a joke about how this pattern reflects WA’s desire to secede. This latter trait appears to be characteristic of isolated regions like Quebec in Canada. Of course, Perth and WA largely sailed through the first two years of the covid pandemic until the omicron variant of covid was able to bypass their strict border controls. Another quirk for WA in the election was that the Liberal party performed even worse in WA than elsewhere, which political commentators attributed the federal government’s unwelcomed calls to open up the border towards the end of 2021. 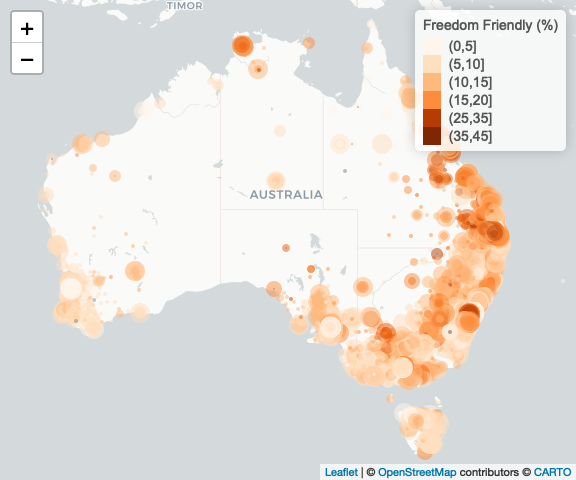 I know I’m being a bit harsh in knocking WA when in fact both South Australia and Tasmania also had pretty poor support for FFMPs. I exaggerate though, because when we zoom into Adelaide, we can see some pockets or resistance or support, depending on where you stand.

Looking across the country, there appears to be a negative correlation between support for FFMPs and states with temperate climate. The states with warmer and humid weather appear to be more averse to the recent government covid-policies. I seem to remember Jared Diamond’s ‘Guns, Germs and Steel’ makes some commentary about the relationship between disease and tropical climates. The pattern we observe is somewhat counter-intuitive in that the states with temperate climates tend to be stricter in relation to health & disease policies; is this because although areas in tropical regions tend to have more diseases they are actually better equiped to deal with them, without strict cultural norms of control? 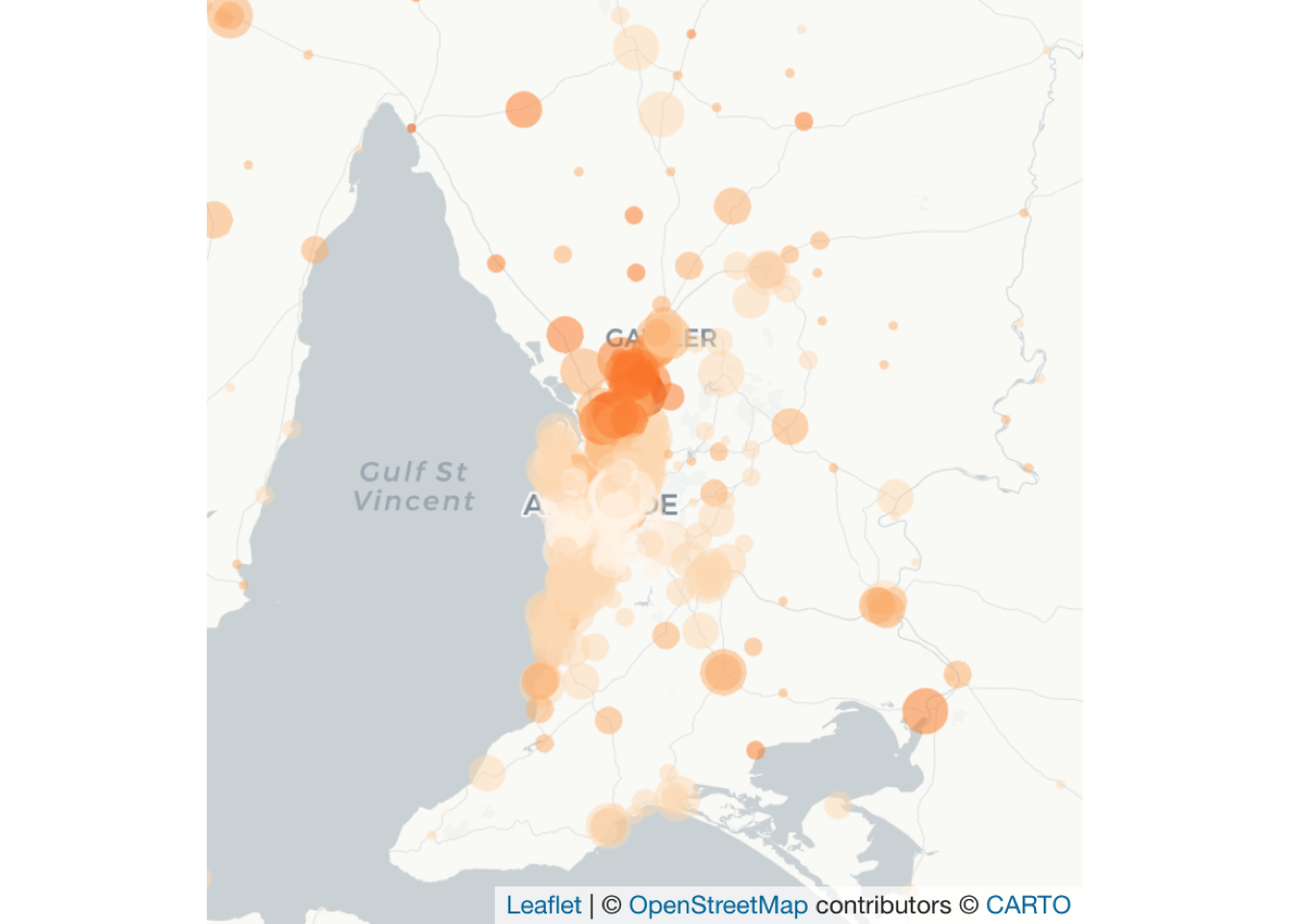 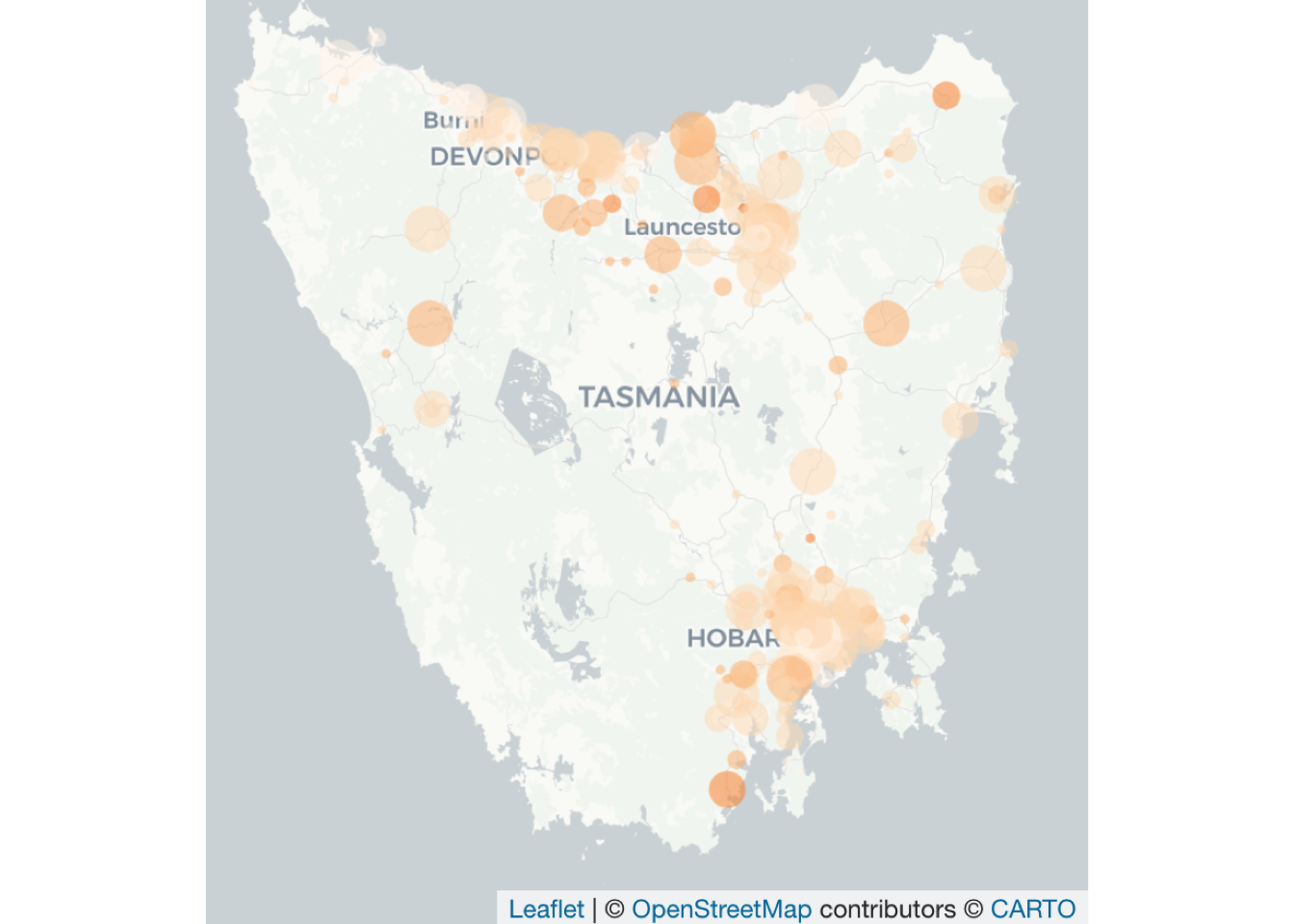 This blog post answered in a literal sense where the support was for the FFMPs. I reviewed the geographic distribution of freedom-supporting/disaffected/libertarian Australian citizens, as indicated by their first-preference voting in support of UAP, PHON or LDP candidates. Aggregate support for these parties was as high as between 33% and 41% in the top ten ranked polling places, albeit all at polling places with less than 500 votes.

Those looking for similar folk can find them in, in order of likelihood of encounter:

With larger polling booths having percentage support for the freedom friendly parties in the 20s, particularly in QLD, the results of the election suggests that the major parties likely preferenced each other rather than any of the FFMPs. An analysis of results by electorate for the FFMPs may warrant another blog post, while a review of voting trends over time for the freedom friendly parties would be interesting. Note that PHON and UAP have only recently earnt the label of categorisation as freedom friendly.

Lastly, please comment below if you found this interesting. Always interested in receiving feedback and other ideas and interpretations.